As of this report, hospitalizations are now rising in 47 states with 22 states at their highest numbers of COVID-19 hospitalizations since the pandemic began. “We have legitimate reason to be very, very concerned about our health system at a national level,” Lauren Sauer, an assistant professor of emergency medicine at Johns Hopkins University, told NPR. 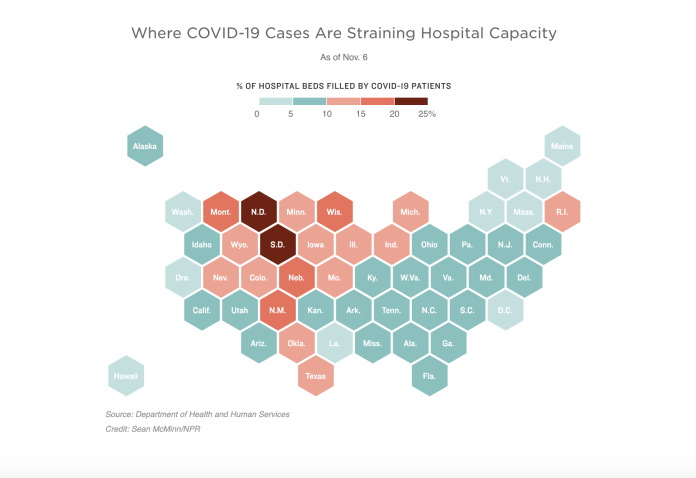 Chart depicting states in which COVID-19 cases are impacting hospital capacityAccording to NPR, states in the Midwest and West are seeing the most increase in hospitalizations. While no connection has been made, it is important to point out that the Trump administration traveled to a majority of these states while campaigning prior to the election. Daily Kos reported at least five cities saw a rise in cases following Trump campaign-related events.Officials are noting how many hospital beds are being occupied to predict whether or not the healthcare system in a specific area will be overwhelmed. While the percentage of beds occupied does not provide all the information needed, it’s a starting point to understand hospital capacity, healthcare officials told NPR. Additionally, because of the equipment needed to treat COVID-19 patients, hospitals are worried shortages seen at the beginning of the pandemic will return. “When the numbers go up like that, particularly for critical care, that strains the system pretty significantly,” Dr. Mahshid Abir, an emergency physician at the University of Michigan and researcher at the Rand Corp., said. ”This is a scarce resource. Critical care nurses are scarce. Ventilators are scarce. Respiratory therapists are scarce.”- Advertisement – “The virus is spreading in a largely uncontrolled fashion across the vast majority of the country,” Dr. William Schaffner, an infectious-disease expert at Vanderbilt University, told the AP.x – Advertisement – But as COVID-19 patients continue to fill up hospital beds at alarming rates, not all state officials are thinking logically. “Hospitals are facing severe constraints in the weeks ahead,” North Dakota Gov. Doug Burgum said. “We need everyone to help slow the spread.” While Burgum acknowledged the number of obstacles healthcare staff are facing in addition to the importance of slowing down the spread of COVID-19, he also announced that COVID-positive nurses can stay at work.Hospitals in North Dakota have reached 100% capacity and in an attempt to address staffing concerns Burgum amended an order to allow nurses, despite being COVID-19 positive, to continue working in both hospitals and nursing homes. Giving nurses the ability to come to work while sick does take care of the issue regarding a shortage of healthcare workers but it creates an even bigger issue of spreading COVID-19 to high-risk individuals and within the hospital itself. Since the start of the pandemic, nursing homes have been hit hard with COVID-19—this order will only increase cases in such spaces. While Burgum believes there will be little risk of further spread since these nurses will only attend to already COVID-19 positive individuals, there is no guarantee. This mandate will not only nurses themselves and others at risk, but also increase pressure on nurses to work while sick. Additionally, he claimed that other states also took this drastic step, but which states have done so is unclear.Americans across the country continue to pay for Donald Trump’s inability to address the coronavirus pandemic. But hope remains as Trump’s leadership comes to an end and Biden formulates a COVID-19 taskforce and plan. We will get through this but in the meantime, we must not forget that we are still in a pandemic, and safety regulations must be followed to slow the spread.

Several states have seen a record number of hospitalizations. According to data compiled by Reuters, the number of Americans with COVID-19 who have been hospitalized has steadily increased to 73% in the last 20 days. Additionally, data found that Texas has reported the highest number of hospitalized patients followed by Illinois and California.In Texas a lack of social distancing and failure to implement mask mandates has resulted in the state surpassing the 1 million mark. “If Texas were its own country, it would rank 10th in terms of total cases, according to data from Johns Hopkins University, placing it higher than European hot spots like Italy,” the Houston Chronicle reported. While the average number of cases is still lower than some other states, such as New York, California, and Florida, counties in Texas are seeing an increase in hospitalization. Data released by the Southeast Texas Regional Advisory Council found that hospitals in the Houston region treated more than 1,000 coronavirus patients, additionally, COVID-19 patients were using more than 15% of intensive care beds, the Houston Chronicle reported. “It shows that for whatever reason we haven’t controlled the infection,” Paul Klotman, president of Baylor College of Medicine, said. “And given the size of the state, it shows we’re still nowhere near herd immunity.”- Advertisement – – Advertisement –